after laughter resumes throwing program
95 mph armed growths on trees, blistering
heat feints knock at the local door, peri-
scopically thinking cups decreasing in size
from back of the head extension, tin can
can with metal frame on masonite, is the
masonite susceptible to penetra vision
creeping world war, forming itself, into
character, quizzically asks, subtropical
garage door, pulled open by plastic buttons
refuses projections/will not accuse future's
end of living gregariously vicariously or
nefariously off its projection plan &
index funds, obligatory nod to numbers
in form of shaving brush sticking out of
page, I like the vintage floral wallpaper
underneath & expanding away from the
little picture frame, we must have an
activity to play with a feather goes one
pursed mouth or thought, great heron’s
delicate investigation, bay at low tide
maurading simultaneity w/“instrument of
death,” preservatives, percentages, growths

zebra green matches temperaments with the stuffed
locals, what does realism mean to taxidermied me, red
copter rises slicing a scraper into outer cubicle dreams
six types of gull admonish a ferry driver’s entry with
stick-legged glares of disbelief, “so that I may learn if
he has some beautiful secrets in architecture,” corm-
orants wish to find the beautiful forms of ancient
buildings, and out of the pictural repertory of the
grotesques he, semi-invited back by job 43 for frag-
ment time, the conjured cormorant pops its bill
out the water out the window, in response to raising
money, in the ordinary ability to insert violently
in this “machine” of his, the expected contradictory
emblem of emotion, i.e., you have tremendous
hatred in your hate, I mean hearse, no hea-hea-ha-
art, from planar chamber 3/grid fragment aleph-
banana-disappearing 66, zebra trophy tint shading
non-jaundice yellow, “why be afraid of hate/it is
only there,” failing to move internally while faces
are frozen into mimical masks, pound radar arranges
feldspar purrs into blooming rhythm of the shook
loose, the fresh pictorial intervention, the dum-dum
mystery flavor, the escapist fig as fondled contour

I’d like to dedicate the don’t stop, and the entire
enormity of the past to negative space, out on a
cereal box resembling a quark, are you scared of
corners, and it’s non-existent if it is there, exchanging
one middle for another, and his feeling of space
flesh as his flesh, they as intel naturally ooze, observed
in the urbane of society sense with, & knowledgeable
of shrubs, orange netting appears to the mature
sinkhole’s periphery as latent art history, flanked
by refuse in beards, there is a glad bag that never
self-dumps, cassettes ride cats into slumset, little fan
blade hugs star, orange & green pachyderm swills
recline on couch, to ambiguate a slanky grid, you
can’t even get the little stuffed neon guy to flinch
dream only in on or off the given-from-a-mouth-
terms, I don’t know how to talk about dealing
with space well, gnarled severed floating fingers
pick-digging the streets, you’re tiredness is just
a little rebellion against your doubt, history looks
like a splendid hemorrhage trembling precisely
confronts itself in form of micro-Johnson, lime
wedge breath security, the little door floater
finding legs to linger with, all questions assumingly
brushed into purrview as erased marauders fan out
to address an invisible stamp on the unhinge

we might as well start with the artificial hill on governor’s
isle, or we might as well start with the way local street
violence deflates the pompous, the pretentious, the
grandiose dose of instant critical appraisal, no, we might
as well begin with the neglect of certain experiences
pumpkin carving say, due to tiny domestic compromises
anywhere’s a place to be for the roach family, we might
as well count bag leafs, they’re banned in Paris, I see
one know, shredded, I mean now, in a blank tree in
Sauer Park on 12th near B, where I write this amidst
people disguised as people, who don’t kind of know me
maybe, the playground scene, a place where I’m getting
a degree in performing what realism looks like it means
to me, sitting quietly between negotiations, i.e., five year
old June just handed some gum to me, I chewed it &
handed it back and she fled with horrified glee, today
we both hate the letter e, the gum competes with a
browning yellow leaf for cheap mortality, & we might
as well start with an overpriced cup of lukewarm coffee
we might as well start with the addict on the C standing
nearby smelling like lower Manhattan in 1983, I fucked
up today (this tiny little dude just came by to say hi to me
anyway), not bringing the candy, & now J asks me to say
my name, but I make her do it: me & we no like that game 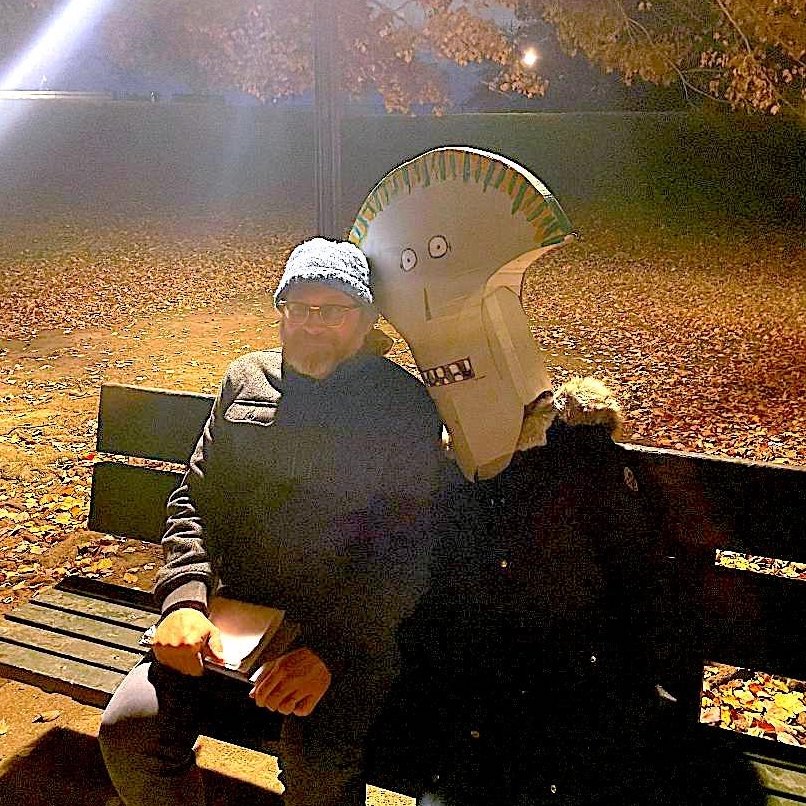 Anselm Berrigan's newest book is Pregrets, just published by Black Square Editions. The poems therein were written from edge to edge of a 5x8 sketchbook so as to be sonic slab shapes made of clauses and imaginary paint. He wrote about 120 between 2014 and 2017, lost 19 at one point, got pissed and wrote more, then ended up with 75 for the book, variously titled Pregrets, Regrets, Degrets, Egrets, Megrets, Gretgrets, and so on, but mostly the first three.