I FEEL UGLY EYES CREATING ME

In 1996, they looked up and said, these kids are uglier to us than other ones. Let’s

wager everyone feels the same

That’s the scientific field of sexology

University students, masked to group status, judged the physical attractiveness of girls with gender identity disorder and clinical and normal control girls, whose photographs were taken at the time of assessment (mean age, 6.6 years)

More recently, Anne Carson translated Ibykos’ fragment 286, first into English, then into a more limited pool of language: the “wrong words” of other people’s texts

Reading, I said, let’s get our friends together and make sexologists talk with our ugly tongues

Don’t get me wrong, I did write a Personals ad ISO the Herakles to my Geryon (pick me up as you get off the bus from hell, and make it hot fast and full of feeling), which yielded one hour of unsatisfying sex and a pen pal in Australia

Beauty tempts, doesn’t it. It would mean they were wrong about us

On the other hand, Carson hasn’t been a reliable friend. For one thing, she has a habit of bringing up Venus Xtravaganza when she has a point to make about men (Gabriel, 2018)

It may be tempting to explain her away as one of us, unrealized, too reluctant to touch the heat of wanting to literally be Oscar Wilde to her cold cheek. I suspect she’s more interested in being so unlike other girls that she had to swallow a hot gay ghost and try to stomach him

Her crisis stalls at the evaporating edge of ~ female ~: before it can burn off, she licks essentialism from her lips

That’s that, and yet it isn’t. I like her methods of wrongbeing. I take them back to the social, to citation’s study of shared life

These ugly little kids were my contemporaries and as weird-looking as I, or maybe –delightfully – more so. I want to find out how ugly we can grow up to be

An old guy did ask some pretty dumb questions. He hesitates.

On people like me. My life + feeling. Considerably masculine

humor. Measure my interest in women, girls. My female

Oh, to cry in a bar, objective, anyone could do. Except I’m not

interested in encouragement. I told him how I can enjoy my

body. The extent to which I cooperate, I’ll be in significantly

less understanding. I mean, I’m bellyward with desire over

here. I remind myself it will all turn out clinical in the end. The

whole spiel. My ablutions are my body and my body is me. If

my Brut deodorant OKs me

BEWARE, A DEADLY FOE IS NEAR (THE LANGUAGE OF FLOWERS)

they tell the receiver

thinking of an absent

in secret ivy, the extent

to which I live

grant me one smile

rose leaf you may hope

Before my wanting to be me on you perks up

lust soaks the improbable space it happens across

I look to you one chair over in the gender clinic

deliquescing with me in the non-profit heat

where unbelievably I’ve never had a crush

on a single overworked nurse practitioner

even the time they sloshed my own blood all over me

but how have you been in the continual girl fight

a cup into which I’ll go maneuver my evidentiary piss

Goodbye, I’ll be at the beach tomorrow

if you’d like to liquify me there as well

My kingdom for another chance to enter

the weather system of our coverup and sweat

This is why I love waiting rooms

There’s still a chance I could get better

the body turns out to be a metabolism, a place where questions are fleshy, digested

while we busy ourselves, trying to girl in fits and starts

there turns out to be something stuck in your procedures

shit takes place, the living weight smeared between your teeth

churning out beauty, too moist, substantial, too real, we didn’t know what real was

ugly, on the other hand, does its own thing

in your nostril, the condition for making a painting

trying to embarrass the uncertain

extent to which material gropes for form

an open fly, you look down at your creation

In addition to language from “Physical attractiveness of girls with gender identity disorder” by S. R. Fridell, K. J. Zucker, et al., these poems refer to and incorporate language from Kay Gabriel’s “Specters of Dying Empire: The Case of Carson's Bacchae,”Anne Carson’s “Possessive Used as a Drink (Me)” and The Beauty of the Husband, Lou Sullivan’s We Both Laughed in Pleasure, Trish Salah’s Lyric Sexology, a database of the Victorian language of flowers, and Amy Sillman’s “Shit Happens: Notes on Awkwardness.” 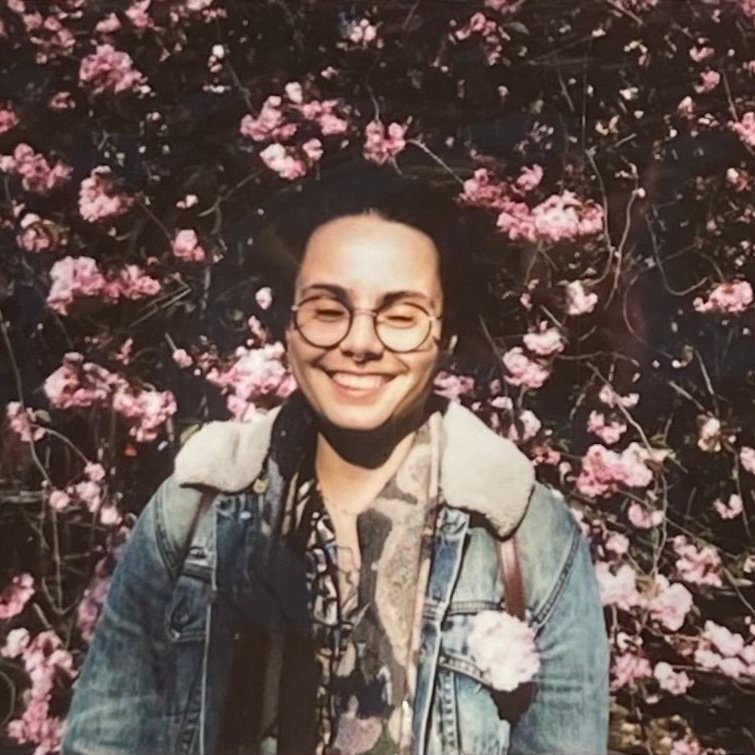 Charles Theonia is a poet, teacher, enthusiast, and transsexual without direction. They write about gay zits, sexology, and disco.