DOVELION: A Fairy Tale for Our Times (Excerpt) by Eileen Tabios

Once upon a time, Elena approached a grey building to meet the person she’d learned to know as “Ernst Blazer” instead of “stranger.” She wondered, What are we creating?

In her multi-layered novel INSURRECTO, Gina Apostol ends her first chapter with the statement: “Choosing names is the first act of creating.”

Elena wondered if the novelist’s theory is correct, having just seen “Bird Box,” a movie whose Netflix audience surged for months upon release. Its primary protagonist Malorie, played by Sandra Bullock, temporarily refused to name two children, referring to both only by their genders: “Boy” and “Girl.” But the two children were created—feeling fear, pain, joy, hunger, curiosity—before they ever would hear their names: “Olympia” and Tom.” Indeed, nearly all humans are conceived ahead of their names—unnamed, they still exist.

They exist, but are not living—they are not creating, I told her or she told me.

What are we creating, Ernst, and what would it be called?

The questions made Elena pause. Standing still, ignoring the traffic around her and the distant music of children’s laughter, she turned her gaze inward to consider: “What is something that is not created?”

After a few moments and despite being a poet, which is to say, cautious as regards any definitive answer, Elena answered herself definitively: “inheritance.”

Once upon a time, a woman approached a grey building to meet a stranger in their apartment. She noticed some red roses blooming by the front door. Inhaling their promiscuous scent, she admired the red, waxy petals for their vividness as she pushed an intercom button. I want to live my life in Technicolor! When she heard the buzz that unlatched the door, she pushed it open and was immediately blinded by the sun.

She screamed herself into a different sun, this one just dawning outside her bedroom window. Heart pounding, she looked around. She was on her bed, damp and heaving breaths. Beyond the window, the sky was turning a benign, even pretty, pink. Nightmare, she thought.

As the sun evaporated darkness, as she felt her heartbeat slow down, she recalled her last words in the dream—what she’d been screaming. She had been pleading with the sun, Wake me! Please. Wake me!

Something was blinking red at the periphery of vision. She turned to see her alarm clock. It was time to rise. It was time to get ready. She had a meeting that day with a stranger in a grey building whose entrance was lined with red roses. She thought of an old poem where she’d written, I want to live my life in Technicolor! Wake me!

Once upon a time, Elena approached a grey building where she knew Ernst waited. She imagined that they were waiting with much anticipation—they had ended their last meeting with words she’d kept turning over and over in her mind: You redefine Bliss…

From their apartment window overlooking the street, Ernst watched her approach. Dear Elena, they thought, Bliss is not sustainable in all of its versions.

They turned their thoughts inward: And you will be a bastard for teaching her that lesson today.

Once upon a time, no grey building stood on the corner of 24th and Broadway. For the grey building to exist, battalions of laborers dug deep into the earth, excavating their way through layers of dirt and stone to create a building foundation. The president of the construction company exhorted his workers whenever he visited the building site: “Let’s offer not just a haven but a heaven to future residents! Let’s first dig through hell!”

A cheesy pun that led to muddled as well as muddied words—but his message was clear: eager excavation of profits.

Broadway extended the length of the city, but its corner with 24th Street was in a neighborhood unknown to her for reasons related to its nickname, “Tartarus.” My much used—thus, much loved—Wikipedia explains Tartarus as “the deep abyss that is used as a dungeon of torment and suffering for the wicked and as the prison for the Titans.”

The nickname repelled her from visiting the neighborhood, though gentrification had smoothened much of its prior rough edges. The name repelled because it seemed to her that she’d already spent an exponentially large amount of her education on the Greeks. The Greeks again? scoffed the postcolonial pundits of the time to whom she was frequently introduced at the colleges where she adjuncted for a lowly series of wages. Yet there she was, she chided herself, walking up Broadway through Tartarus. When she reached her destination and felt joy as she raised a finger to jab at the intercom, she also couldn’t help thinking how wise poets often end up asking, What fresh Hell is this?

Later, when she revealed these jumbled thoughts to the stranger, the stranger’s hand paused before continuing to stroke her hair. She could see their eyes more clearly as they’d finally made time for a haircut. She liked their hair shorter for revealing more of the feelings lurking within their dark eyes—this time, kindness revealed itself.

“You do know,” they said as they caressed away sodden strands from interrupting the sunlit ocean in her eyes, “the Titans’ only survivors are their poetry…”

She closed her eyes but immediately replied because she felt the answer would please them, “As it should be."

Once upon a time, Elena walked up a city’s longest street where a grey building stood, deceptive in seeming to be anonymous among other such buildings. I am here, Elena thought as she stepped over sidewalk cracks, to flesh out the gaps, the absences, that have come to form the primary motivations of what I do. I’d rather not wallow in what’s missing. Surely life can be different—larger?

Elena came to share her thoughts as she stood, nude, on a pedestal.

“Many assume that someone behind a mask contains much to reveal,” the stranger replied. “But it may be the person who dares to be naked before the world who contains much more to share.”

“Hiding in the open,” I said, then subtly stiffened my belly to make my breasts rise. Once, I peeked at a canvas-in-progress. Before they moved to block my view, I saw lavender, a golden crown of thorns, and the two letters “M Y.”

Before they finally revealed the painting and its title, I’d already indulged in weeks of speculation—several times, I thought, or hoped, the title would be “MY LOVE.”

Instead, Ernst, no longer a stranger, revealed that they had titled my portrait

Once upon a time, Ernst stood by the window of their third-floor apartment to watch Elena approach the grey building where they already had spent a decade. In the middle of that decade, there was “another woman.”

“What was her name? She’s not just ‘another woman’,” Elena smiled to blunt any sting from her question.

“Of course,” Ernst quickly replied. “Names are significant and her name is Madeleine.”

They didn’t say—admit—they were initially reluctant to share Madeleine’s name as it evoked the pain of regret. Briefly, they thought to share their reason, but remained silent and allowed Elena to change the topic.

Later, seated on the fire escape balcony to her apartment, Elena looked up at the night sky. She did not see the stars camouflaged by the lights of yet another city that refused slumber. But in the folds of the dark sky where darkness contained varying shades of black, Elena saw the hair of another Madeleine—a woman whose presence was hidden by her lover to his friends and family, though revealed and immortalized today in Wikipedia. A woman who, like so many other women, existed outside the frame—Madeleine Knobloch, the lover of Georges-Pierre Seurat, the post-Impressionist painter who developed pointillism.

I know how you feel, Madeleine, Elena thought as she looked up at the hidden stars. It’s like my father’s life. He’d led the opposition to The Dictator. But victors write history—because The Dictator prevailed, my father’s life will be lost to history. My father will have his life pushed outside the gilded frame that bears the portrait of a fake royal with fake medals on his chest: a dictator who plundered a country and erased those who stood in his way.

But then, more second-guessing. Elena lowered her eyes from the stars. The Dictator, your ugly head pokes through my life again, she sighed. I’m no better than Ernst to make Madeleine’s life about you and not her.

The Dictator, she thought as she reached for the bottle, I don’t want to live in your Aftermath. 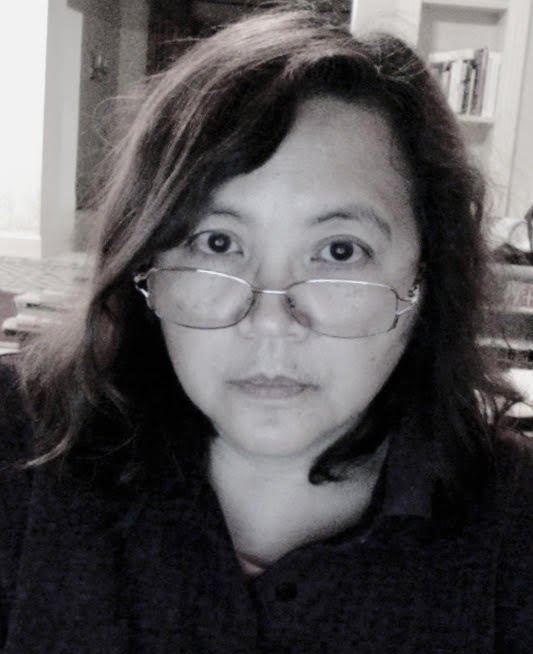 Eileen R. Tabios has released over 60 collections of poetry, fiction, essays, and experimental biographies from publishers in 10 countries and cyberspace. In 2021, she released her first novel DoveLion: A Fairy Tale for Our Times and first French book La Vie erotique de l’art (trans. Samuel Rochery). Her 2020 books include a short story collection, PAGPAG: The Dictator’s Aftermath in the Diaspora; a poetry collection, The In(ter)vention of the Hay(na)ku: Selected Tercets 1996-2019; and her third bilingual edition (English/Thai), INCULPATORY EVIDENCE: Covid-19 Poems. Her award-winning body of work includes invention of the hay(na)ku, a 21st century diasporic poetic form and the MDR Poetry Generator that can create poems totaling theoretical infinity. Translated into 11 languages, she also has edited, co-edited or conceptualized 15 anthologies of poetry, fiction and essays.