TEN YEARS IS A FUNNY AMOUNT OF TIME.

Had we been told at the beginning that we’d be running speCt in 2022 at much the same shape and scale that we started, we probably wouldn’t be incredibly surprised—we’re a scrappy bunch of print enthusiasts who wouldn’t have it any other way. And yet, looking back, it’s gratifying to witness the accretion of change and experience across the years: the adventures, the highs and lows, and of course, the books.

speCt was founded in 2012 when Gillian Hamel, Peter Burghardt, and Robert Andrew Perez were either in or had just graduated from the MFA program at Saint Mary’s College in Moraga, twenty minutes east of Oakland. We don’t remember exactly why we wanted to start speCt; most likely it was a natural extension of our interest in publishing and the physical object of the poem, which we’d been experimenting with in various ways over the previous two years. It was also an outgrowth of the fact that Peter had a line on an old C&P Pilot Press he’d shared with a friend in Chicago, an opportunity that was too good to sleep on.

So, Peter flew out to Chicago to retrieve the machine. His friend, the poet and activist Brooks Johnson, had been gracious enough to part with the press, believing we’d use it more actively than he was able to. Brooks was headed to protest at Occupy when Peter flew in, so it was on Peter to retrieve it from Brooks’s Chicago warehouse, nicknamed “The Spaceship.” When he knocked on the door he was greeted by a sleepy man using a sledgehammer as a walking stick. After a few phone calls to prove the bonafides of speCt’s mission, Peter was allowed to cart up the press and ship it back to Oakland.

Even though the C&P is a small letterpress, historically used for student instruction or hobby work, it’s cast iron and weighs about two hundred and fifty pounds. This simultaneously fragile (cast iron is brittle) and mighty piece of machinery has been the clanking heart of our endeavor, shaping our aesthetic as we’ve learned to work with and around its particular limitations and abilities.

Among the memories that have been clouded with time and cheap grad school beer is exactly how we settled on the name speCt! We think it had to do with three things:

And so in a way, who we are as a press (our name and our vision) is a gift and artifact of the machine itself.

For years speCt only published chapbooks. Our first book was a collection of the editors’ work, simply titled speCt!, which we printed in the driveway of Peter’s apartment complex by the light of dusk and flashlights.

From there we started publishing single-author editions, with the first season of titles by David Lau, Shane Book, Steffi Drewes, and Amanda Nadelberg.

There is so much we could say about those initial years. We made a lot of mistakes, taught ourselves how to use our press, paid way too much to have other people cut paper for us, and cycled through several printing studios, that each leaving us with a distinct flavor of kerosine-induced headaches.

We fondly recall launching a pandemic relief petition that brought shame and humiliation, if not meaningful change, to the cancerous ulcer that is Poetry Foundation and POETRY magazine. Other highlights include arguing about immigration policy with Christian Bok in an AWP hotel room, posing nude in exchange for poetry permissions, and an innovating “rolling paper as poetry broadside” ephemera.

At one of our readings, Forrest Gander and CD Wright cracked up at Sad Vicious’s “poetry professor” routine; a Berkeley professor walked out of that same performance in disdain, we’re proud to report. We remember Gillian absolutely READING a (straight white cis male) poet for telling students how easy it is to be published and successful as a poet. And who could forget Kevin Killian and Turner Canty doing an amazing cover of Femme Fatale at another of our readings?

Last but not least, we’d like to draw your attention to an AWP offsite we held in the basement of an escape room that was co-hosted by a life-size papier-mâché R2D2: way you tell your story online can make all the difference.

As time went on, we got ever so slightly more professional. Chris Philpot joined as an editor and brought some much-needed Cancer energy to our Gemini-Gemini-Scorpio party. We invested in new and better binding and trimming equipment. We settled into a groove.

As an editorial board of mostly introverts, we looked to our resident extrovert, Robert (aka Phoebe Cakes, a now renowned Bay Area drag artist), to bring us to the community. This led to the creation of our spotlight series, “Poetry is a Drag,” which pairs drag entertainers with poets for a night of poetry and performance. This description is a lot more boring than the enthralling evenings tend to be — our hardest choice of the early pandemic was deciding to indefinitely postpone our fourth installment of the series.

In 2016, wanting to expand beyond chapbooks, we launched our semi-annual journal OAR. After a couple of goes with the journal, we realized it is actually a lot harder to manage multiple authors per publication, and pivoted our operation into full-length manuscript publishing with our first title, Will Vincent’s Wildfires.

ince then we have published a total of four full-length books, with two more due out this summer: Brian Whitener’s The 90s (available for pre-order here) and Laura Woltag’s Serviceable Clothes for Life in the Open. We operate as a collective editorial board, with no defined roles; each editor has equal say. We will publish anything we love, and have a soft spot for first books, which comprise well over half of our catalog. We are slow, and would like to think slow is smooth and smooth is fast — but sometimes smooth is also bumpy. We thank our authors for their trust in us and for, at times, bearing with us.

Which brings us to the present day. After all this time, we think the greatest thing we’ve learned, corny as it sounds, is that a project like speCt comes from and is good for the heart. In the pandemic world, we editors see each other a lot less than we used to. We’re in varying stages of our thirties, and our lives have taken on new dimensions that challenge our time and energies. Yet speCt makes space for us to be together, in poetry, as friends and collaborators. Sometimes it’s mundane, tedious, and stressful, but there is nothing like the feeling of giving life to another artist's ideas through a vessel the reader can hold in their hands and know, this was made for my hands, step by step, piece by piece, by hand. 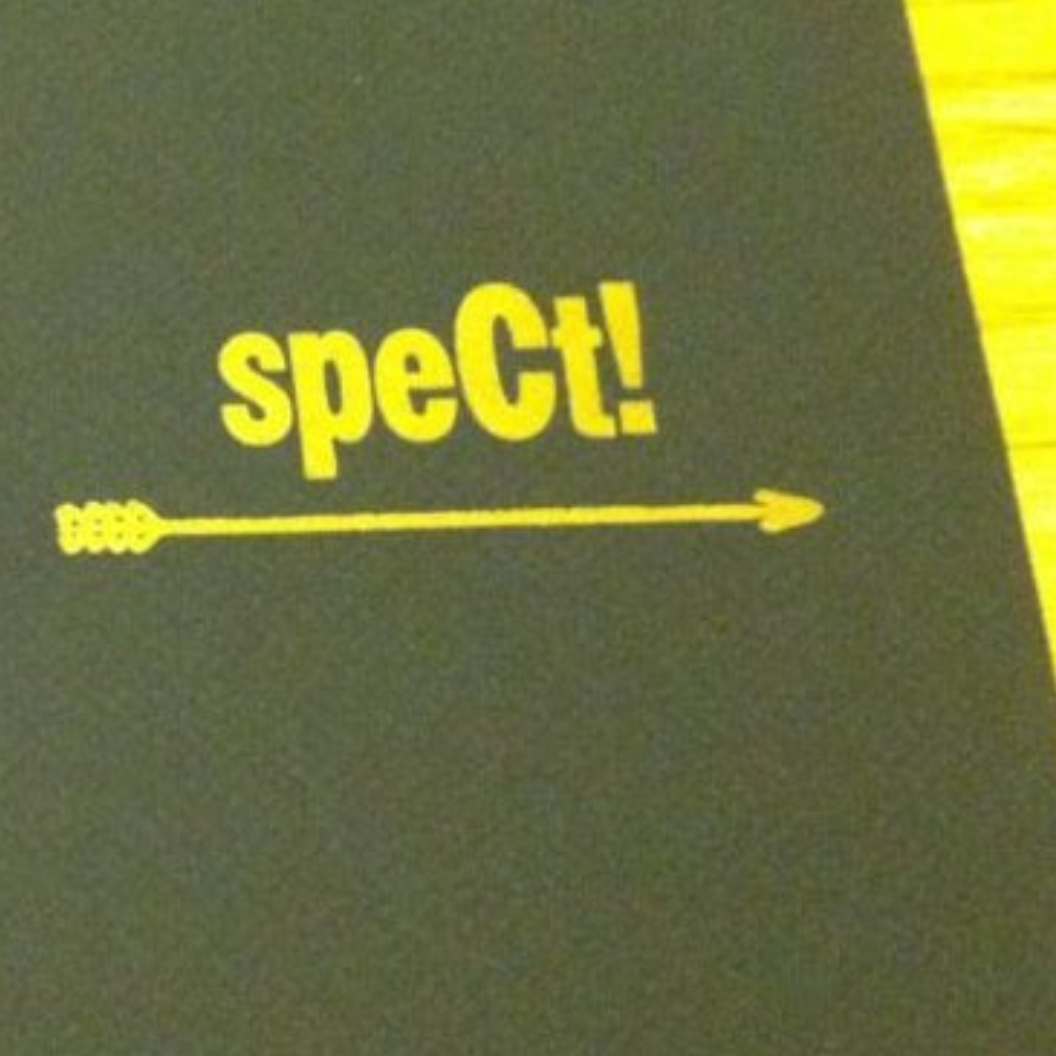 speCt! books was founded in 2012 and operates out of Oakland, California. We print chapbooks, fine art, ephemera, and OAR, a journal of poetry. We believe in poetry as art and as artifact. All of our titles are produced one copy at a time, on our antique C&P pilot press. If you have any questions, or would simply like to say hi, feel free to contact us at info@spectbooks.com.