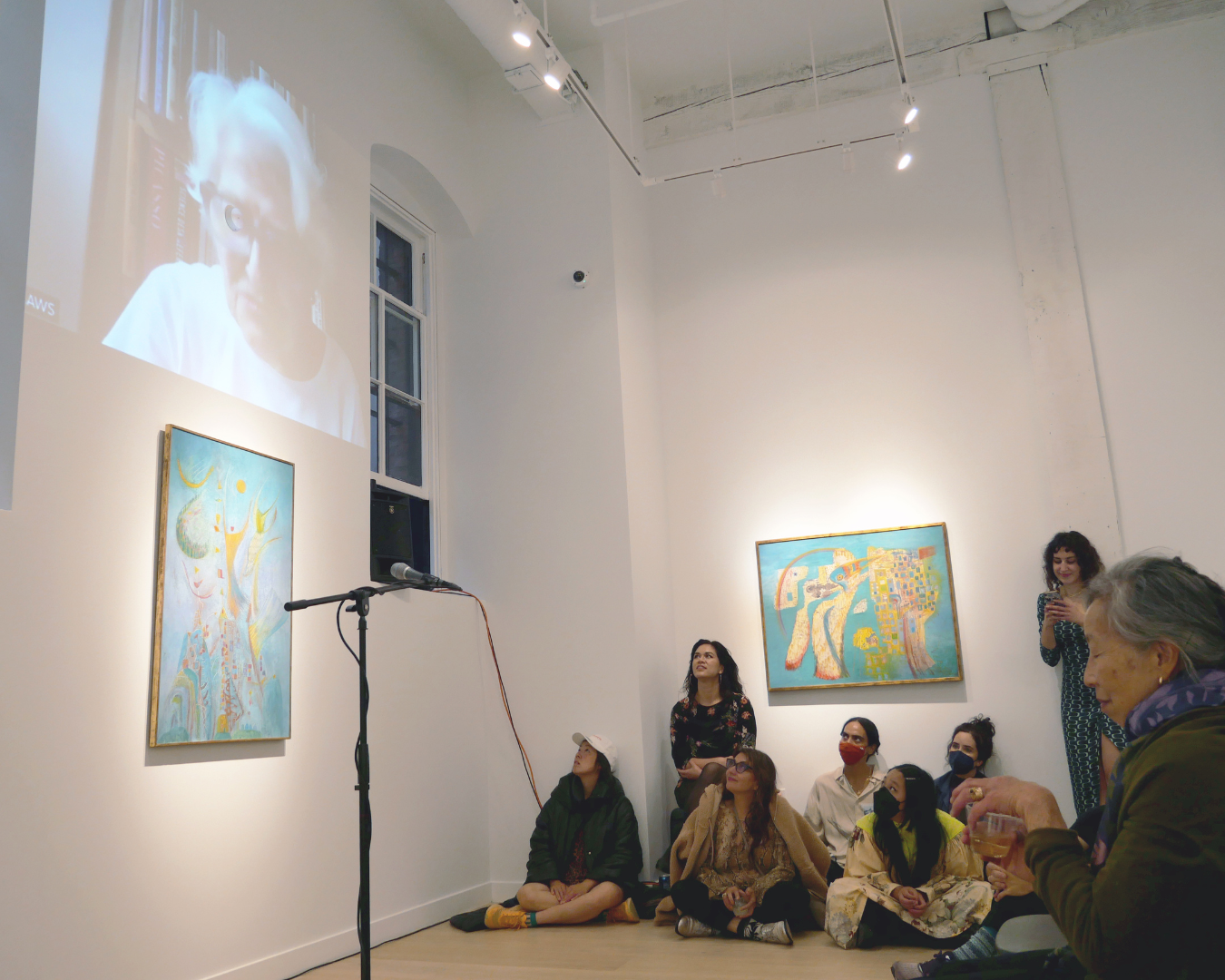 Small Press Traffic held the first event of our season on the first day of this month, a reading at Gallery Wendi Norris in conjunction with the opening of Uncovering Alice Rahon, a gorgeous, too-rare taste of the French-born poet turned painter. I was there early and watched the narrow space fill to the brim with people from different corners of the Bay Area art world. Just before we started, a number of poets arrived in a predictably last-minute gust; there were no chairs left, but no matter, they squeezed their way to the front of the space, clustering on the floor almost under the noses of the readers.

I was pleased by this development, in particular because the front of the gallery in this case happened to be the back room, what will eventually be an office. The visual metaphor of these friends and community members almost instinctually heading to the cramped corner where they didn’t really fit but also totally belonged — a repurposing that imbued the space with vitality — was perfect.

I’ve been thinking of back rooms lately because, well… here we are. As many of you surely know, The Back Room takes its name in part from SPT’s 1974 beginnings in the back of a bookstore — the Castro’s Paperback Traffic, owned by Donn Tatum and Steve Lowell, a home for queer culture and a space for music and art in addition to readings. But our moniker is also a nod to these spaces (actual and psychic) you inevitably become familiar with if you kick around the arts for long enough. I’m thinking of the awkward almost-places where poets are asked to read: the not-quiet-enough corner in the bar with the poorly positioned lighting, or the cramped passageway in the bookstore that could be said to resemble a room if you squint at the right angle. And I’m also thinking of the back and side-quarters where everyone goes after the event, often in my experience a restaurant that satisfies four requirements: close enough, cheap enough, open late enough, and, alas, mediocre enough so that at least a few tables will be dependably empty.

And of course there are always rooms within rooms. Some of these are social and political. In his beautiful autobiography as cultural history, Before Pictures, Douglas Crimp reflects on the lives within his life in the late 1960s and 1970s by describing the setup at Max’s Kansas City, the fabled New York art bar:

Max’s had two rooms — a long, narrow one in the front along the length of the bar and a square one in the back dominated by a Dan Flavin sculpture hung above a booth in one corner, bathing the room in fluorescent red. […] To get to the back room, I had to traverse the front one, where I would see and briefly greet some of the artist-regulars I knew by then. I was always a bit self-conscious about not stopping to spend time with them, but the queer goings-on in the back were what drew me to Max’s. […] I loved the charged atmosphere of the place, the wacky characters vying with one another for attention, the fact that you could hang out all night for the price of a single drink or cup of coffee, the cruising.

And some of these rooms are of a more private nature — not that the categories line up so neatly, ever, but I am thinking in particular of the invisible realm that envelops a person reading a book in public. I am remembering the miraculous little stoop in Tuttle’s Store where as a kid I discovered X-Men comics, stepping up and into another world as if making use of the same portal my beloved mutants used to move through time and space. And I am thinking of the cluttered closets and basements where the past gets stored, entire archives shoved into decidedly non-archival boxes and shelves, to be lost and found and confused alongside memories and competing narratives about how it really was.

Some of the writing I love most (that helps me most) attempts the perilous, tender task of entering these sorts of rooms, offering a window into something, perhaps rare or humble or lost, and deeply, wildly meaningful. Something not always easy or possible to describe — yet the need to try anyway, to share, to be generous, to connect, compels us on.

This is the sort of room I would like to create here. I’m also imagining a space where you feel at ease; where you’re not rushed. To that end, we plan to publish slowly; after launching with commissions from Marvin K. White and Jason Morris, we’ll settle into a twice monthly cadence, typically publishing one and on occasion two pieces at a time. As we move from fall to spring and back again, the previous season will migrate from Now to Then on our homepage (for now, Then features this nod to our past). We’ll do this work in collaboration with contributors present and future, with partner organizations and guest editors, and with Syd and everyone at Small Press Traffic — which also, of course and obviously, includes you, dear reader.

The Back Room
Support